Your app featured in the Windows Phone Store

This post will show how a mail notice about a scheduled promotion from the Windows Phone Store Apps Team looks like. It will also present some related app and web resources.

I have seen major download peaks for my hobbyist apps while they been featured in the Windows Phone Store. They might not receive the attention they are worth from me and I do not promote them very much, but it is still fun and a moment of proud to see them featured.

You can read more about how to get featured in the blog post How to get your app promoted in the Windows Phone Store. Another option, I have not tried but looks available,  is to use DVLUP XP to purchase merchandising campaigns for the store.

It is possible to create a great user experience even without epic UX skills by keeping the UI clean and simple while focusing on how the user will interact with the app. Unfortunately many app developers tend to spend days on optimizing already good enough code instead of giving the user some love. A nice and functional app UX will give you both better reviews and a better chance to be featured.

One lesson learned for me is my last app logo. It is quite insignificant and boring to be honest. This will not help when the app is featured and fight against other featured apps for the user attention. Try to create an eye-catching logo.

The current version of the MS Dev Center app does not include any info about how often and where your apps been featured. I use the App Spotlights app for this. 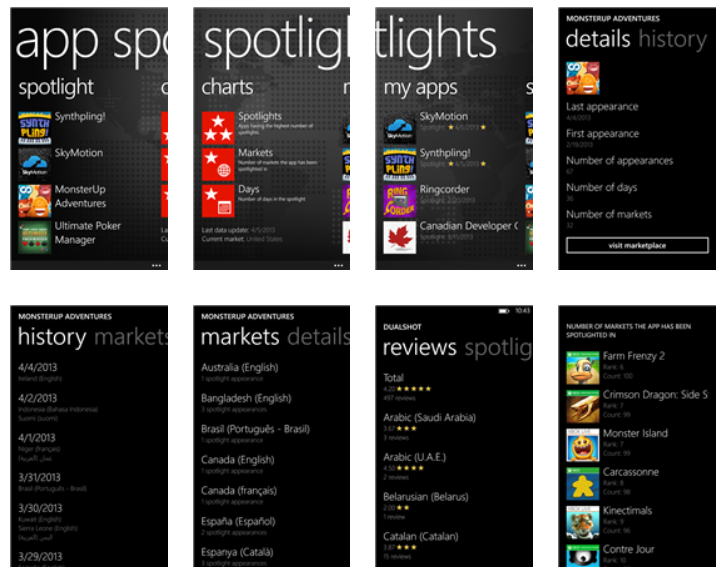 I will finally show you an example of how the mail notice look like for a date and how they break it down per app and country for all phones, Nokia or other than Nokia phones.

We have exciting news for you! Your app is scheduled to be featured in the Windows Phone Store on 7 February 2014. Each week, the Store features a fixed number of notable apps and games in prominent promotional spots for the day. Apps are featured in different combinations where they are visible based on market, placement, and device. These promotions help give great apps like yours the visibility and attention we think they deserve.

Many developers have also found it valuable to increase this exposure with their own marketing efforts. The blog post How to Market Your Windows Phone App can help you get started. You can also download the Dev Center app to track your app’s progress.

Occasionally we need to modify the promotion schedule after we have sent a notification to you. We want you to be aware that this may result in a change to your app’s featured date(s).

All of us here at the Windows Phone Store appreciate your support, and we can’t wait to see your next creation!

Q1: How does Microsoft choose which apps to feature?
A: This blog post and video provides an overview of Microsoft’s promotion criteria.

Q2: Where in the Windows Phone Store will my app appear?
A: Your app will appear on the phone in the Store, Apps, or Games hubs in one of the following slots:

Q3: I received an email that my app would be promoted in the Windows Store but it wasn’t there on the date promised. What happened?
A: Sometimes we need to make last minute changes in the promotion schedule, and we are not able to pass this information on to the developers affected by the change. When this happens, we do our best to move these apps to the next available featured spot in the Store.
Windows Phone runs on many different devices and promotions will vary across the range of devices and the web. Refer to the email notification to see which device type your app will be featured on. Also ensure your phone is set to the same market/language combination of the promotion to be able to find your app. Note: this notification program is for Windows Phone 8 apps only.

Q4: Is this a one-time promotion or will this process continue in other regions?
A: Promotions in the Store rotate on a daily basis and your app may be featured again on other dates/regions. Apps are featured in different combinations and have varied visibility based on market, placement, and device. If your app is featured again in the future you will receive additional notification for that promotion.

Q5: My app is about to get an update, can the promotion be pushed back until this date?
A: If you request the promotion be delayed, we will make every effort to take appropriate action and remove the app from the current scheduled promotional spots. The updated app will be considered for promotion once it is available in the Store.