Google Analytics for your WinRT app

I have looked into how to use Google Analytics in a WinRT app and would like to share my findings.

GA is a service offered by Google that generates detailed statistics about the visits to a website. I use StatCounter for my own purpose and there exist a lot of similar services but GA is probably the most used. I will not dig deep into how GA works but provide enough info to get started and setup what you need to use the frameworks presented later in this post..

1: Create a new Google account or use an existing one to login at GA:s homepage.

3: I tested setting up an “App” account without success. My advice is to instead use “Web Site”. Fill out the form and finish by clicking on the “Get Tracking ID”-button. 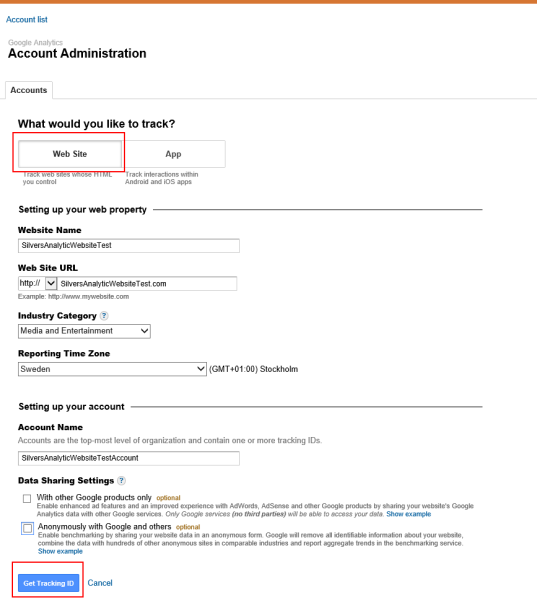 4: You will now be presented with the, for this post, important GA Tracking ID. 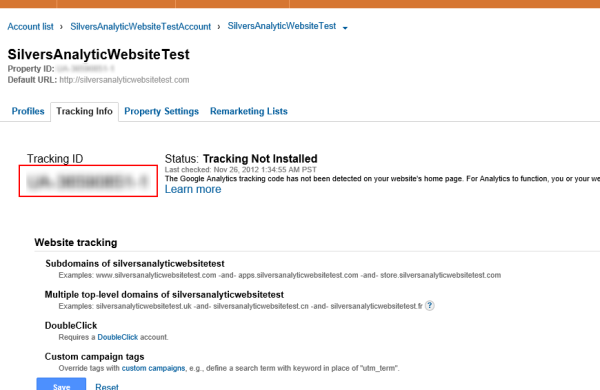 You can either use the Google Analytics Tracking API directly or communicate with GA via a framework. My search engine found four alternatives where the two first matched my requirements best:

“Easy-to-setup analytics and actionable insights on how consumers are using your Windows 8 apps.”
This one has a free beta at the moment.

Read more about the framework at the creators blog.

This framework can be downloaded at http://w8ga.codeplex.com/ or via a Nuget package. The download variant include a sample project. The current version support the following GA features:

You can read more about the latest release here. I decided to use the Nuget variant and created a test project:

1: Create a Windows Store Grid App Project in Visual Studio. (Yes, I use the Visual Studio 2012 Color Theme Editor as you can see) 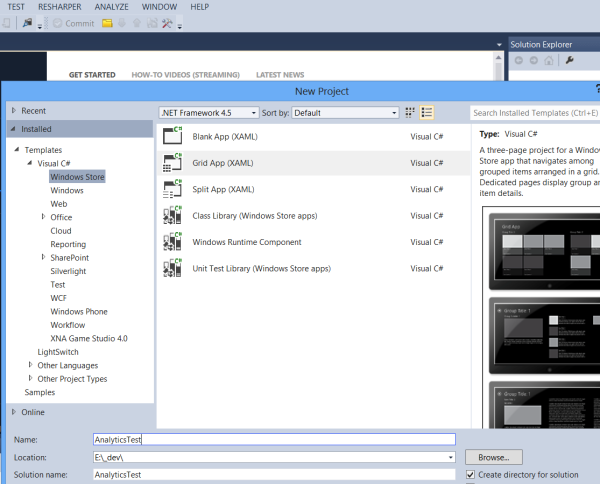 2: Install the Nuget package by searching for “w8ga”

3: (Version 2.2 of the Nuget package has a bug with a missing generic.xaml file. You can get it by copy it from codeplex but Alex, the creator of the framework, fixed this problem in a 2.3 version just a few minutes after I pointed out the problem to him in a mail)

4: Follow the instructions at http://w8ga.codeplex.com/wikipage?title=Howto and use the GA Tracking ID you created previously.

5: Run the application and see how it feeds GA with tracking info.

“Google Analytics for WinRT” does not support multiple web property tracking within a single application out of the box but you can solve this by altering the source code and making the AnalyticsHelper non-static.

Now it’s up to you to apply this in your real application.

This framework can be downloaded at http://gawinrt.codeplex.com/. It has no Nuget package or documentation yet, but is easy to use. The current version support the following GA features:

with the planned future features:

I created a test project in the same way as described above for the “Google Analytics for WinRT “-framework. I also used the same places in App.xaml.cs to setup and use the trackers.

This worked perfectly and tracking info showed up in both my Web GA accounts.

The “Nascent Google Analytics for WinRT”-framework does not yet support user tracking for  things like ISP and screen resolution, but on the other hand it supports multiple web property tracking within a single application out of the box.

How “Unique” are Unique Visitors in Google Analytics

A new Google Analytics SDK for Windows 8 and Windows Phone can be found at http://googleanalyticssdk.codeplex.com/. Read more about it in Tim Greenfields blog post.